All the ends of the earth
have seen the salvation of our God:
sing joyfully to God, all the earth. – Psalm 98:3

Jefferts-Schori and Corvallisgate: Electoral justice is also a “justice issue”

Last month I posted an article on the Jefferts-Schori election coverup.
It occurred to me since that though The Episcopal Church is focused on "justice issues" as few churches ever have been - to many Episcopalians, it probably hasn't yet registered that electoral justice is also a "justice issue."
Why this election matters - and why it may be a lot worse than the Watergate scandal decades ago. 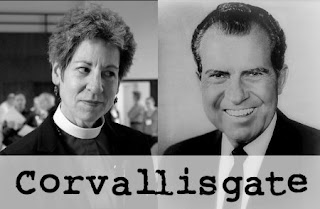 In 1973, many Americans were confronted with unpleasant news.  The President of the country they dearly loved was being investigated.  To many, the subject of investigation must have seemed odd and far-fetched: the question was being asked whether the President knew if a group of five men had broken into a building used by the Democratic Party as its headquarters, and whether he had engaged in activity to cover up the incident of this break in.  Many probably ironically wondered why Congress wasn't investigating the burglaries of their own homes, given how endemic burglary had become to American urban life.  The theft of an automobile or cash under one's mattress can have real and dire implications for a family's well-being; but what was alleged as stolen here was merely a party's “secrets.” No children go unfed because of such melodramatic news in the ongoing scuffle between political parties plotting to outdo one other in painting a brighter picture of America and winning America's votes.

But to the more perceptive, something much greater was at stake than five men breaking, entering, and stealing: what was at stake was a seemingly abstract issue we call “electoral justice.”  It's about polities which hold to democratic process, and the diligence they must maintain in preserving the fairness and honesty of elections.  It's about the consciousness that even when we elect a great man with great ideas, passion for justice, and loving charisma, who may very likely improve the lives of everyone – that if we do so  by means of a dishonest election, we are also undermining our very democratic sensibilities, and the principles which unite us as a people who live and work together.  And this seemingly abstract issue has very real consequences when we permit electoral injustice to occur with uncritical eyes: we begin to lose hope in fairness and transparency of governance, and are likely to slide into a form of political cynicism in which tyrants flourish – a situation in which the people so ruled have little say in things.

Katharine Jefferts-Schori, the first female Primate of the Anglican Communion, is a woman thousands of Episcopalians and other Anglicans have grown to love and appreciate over the last five years.  On the basis of her performance amongst Episcopalians, I have no doubt that were a vote to be held tomorrow for the office, that she would win by a wide margin.  Unfortunately, however, her election as Presiding Bishop was marred by a significant anomaly – one which might have begun innocently enough.  What is clear is that the end result of the election is a situation in which it is likely that the Presiding Bishop was elected under false pretenses, and in which significant election fraud very likely took place.  It is also clear that Jefferts-Schori herself knew this to be the case.


The Episcopal Church and the larger Communion have been virtually silent about this electoral anomaly.  The Episcopal News Service produced no retraction of the false information it had disseminated to the world, which was picked up by hundreds of news sources, many national and international; even Anglican blogs across the ideological spectrum were rather silent, after the initial coverage at Virtue Online.  The silence on this matter is all the more poignant when we consider how the Anglican news and blog world exploded with coverage over the issue of "mitregate": on an occasion in the U.K. when Jefferts-Schori was allowed to hold, but not wear, her bishop's hat.  Likely election fraud - virtually no coverage; hat-holding - nearly universal coverage.  What does this say about Anglican interests and media?

The question of whether Jefferts-Schori would have been elected without the falsity contained in the election materials is largely (but not entirely) irrelevant.  We must remember that electoral fraud remains such, even if the electoral outcome would not have been otherwise without the fraud.  In this case, without pre-judging whether this actually fits the category of “fraud” or not (though I think it's clear that what we have here very likely would be classified as fraud were an investigation held), the event itself merits attention simply in addressing the issue of honesty, fairness, and justice in democratic process in general.  Of great pertinence is also the question: how did it come about that this likely fraud has been met by the Episcopal Church, and the larger Communion, with such silence?  Does this indicate that the procedural governance of Communion bodies in general is incapable of faithfully operating with honesty and integrity?  Are the decisions which our governing bodies make characterized by this same weakness, in that major questions of dishonesty are quickly swept under the carpet by any and all who are aware of them – instead of being investigated, openly admitted, and repented of?

I do not believe that The Episcopal Church is yet ready for a full investigation into the election – and note further: that were such an investigation proposed, that all might be best served if it were agreed beforehand that it would not result in disciplinary measures, but act more as a “truth commission.”  I do believe, however, that it is of utmost importance that Episcopalians and Anglicans learn to comfortably speak about this election, what took place, and what its consequences are for The Episcopal Church and for the wider Communion.  If we are not able to learn to do this – we are likely to find ourselves in a situation with a very unhealthy combination of rather polarized groups.  There will be a knowing few who chuckle at a group of adherents which is incapable of maintaining honesty in the most basic democratic procedures (amongst these few, presumably, many Anglican bishops from all over the world, thus bringing inauthenticity into our Communion gatherings), seeing democratic governance in TEC as largely a sham.  And there will be a group of rather cynical adherents to the views of Jefferts-Schori who do not highly value transparent democratic process, who either take the view “This was a tragedy, but necessary to promote the values we have” or (privately): “Haha, she got away with it; we outwitted our own bishops.” And there will be the large mass of Episcopalians and Anglicans – including very dedicated followers of Jefferts-Schori – who are all very unaware of the growing cynicism in political process, and the increasing divide between “insiders” and “outsiders” in Episcopal Church governance, their futures in the church determined largely by persons whose views they may very well find rather awful, and political factors which they would likely find sickly.  Future candidates for high office in The Episcopal Church (and perhaps even in the Communion at large) would, very rightly, point out that some hypocrisy is involved if they misrepresent the issues they advocate, and are then criticized for this.  Since, after all, we do have this precedent of a leader so many love and cherish – if her example tells us that some sacrifice of the truth is permissible in official electoral process for the realization of our ideals, why then do you criticize me, and not her?

I would suggest that The Anglican Communion now finds itself in a situation not unlike The United States would now be in, had Americans, after having been shown compelling evidence of Nixon's involvement in Watergate, simply said: “That is not important and needn't be investigated.  We love Richard Nixon, and we don't care what he or others may have done – nor what this implies for our life together as a nation; fraud in governance is to be expected; investigations themselves can't be trusted; and thinking about fraud only for the dirty-minded.”  Instead we must consider: speaking of, and investigating possible fraud is painful, and has painful consequences.  But if the United States had not weathered its serious discussion and investigation of the Watergate scandal  – the consequences for democratic procedure the world round would have been devastating, with cynicism and totalitarianism of the ruling classes triumphant.

That said, I should point out something which I believe to be a major difference between our current situation, and that of Watergate.  The public's focus during the Watergate scandal was largely upon the head of state, Richard Nixon.  In our own situation - I think it is rather likely that we will find that there is more fault in the church body collectively, than in the individual who was elected in this process.  This is not to say that I believe that Jefferts-Schori herself is in no way to blame.  Rather, it's to say that a healthy focus would be to ask ourselves: how did we allow ourselves to get this far, and go so long with such an obvious and major election anomaly as this one?  It is all to easy to localize blame upon a single scapegoat.  We need, rather, to understand better our own attitudes toward political process, and those things we did not do, much more than we need to understand what one person or a few did do.

In this discussion, all involved expose themselves to their more tawdry and sinful sides.  Of course, there are parties responsible for the anomaly itself.  But the “conservatives” must also ask themselves: “Why did we fail to speak up about the importance of such likely severe miscarriage of justice?  Have we really become so cynical, that we think it impossible to call our more liberal brothers and sisters to consider such an elemental, secular principle as electoral justice?”  And they must realize that they also are implicated – if only in their knowing silence – in not enabling the church to come to discussion, investigation, and healing on this issue.  If you are an Anglican in the Communion, dear reader - you are also "included" in this great issue of corporate sin.  At this point, it does little good coming up with an explanation "he did ... she did ... they did ..." with no emphasis on corporate repentance.  We are all responsible for this lingering flaw in allowing a major deception to go unchecked in our church governance process; and we all share Katharine Jefferts-Schori as one of our Primates, seated also in the Anglican Consultative Council.
Posted by James at 10:09 PM

Interesting essay. When I think of Nixon, I think of a leader who was deeply suspicious of his political opponents, a man who doubted their loyalty and patriotism. Of course, many of Nixon's opponents felt the same about him.

I wonder if Jefferts-Schori has a similarlarly deep suspicion of her opponents?

Ring the bell. Close the book.
Quench the candle.
Wouldn't it be a shocker if, in the years to come we find out that K.J.S. and friends were getting a cut of the action of all those church properties that she and her friends are putting on the block.
Should K.J.S. decide to bother to read the N.T. she may discover where it says something about settling differences within the church and not in courts of law. I for on shall be happy when this ANTI-BISHOP has finished her term.